Welcome on board Rachael! 😊 twitter.com/RachaelEngland…

About 6 days ago from British Assn. for the Study of Community Dentistry's Twitter via Twitter for iPad

@DanniLBarrett Well done Danni on your poster, thanks for coming to the conference and so glad you enjoyed it 😊👍

About 2 weeks ago from British Assn. for the Study of Community Dentistry's Twitter via Twitter for iPhone

Here’s the link to the membership page on our website bascd.org/activities/mem… twitter.com/harding_mairea…

The BASCD Glacier was first explored and named by Colwyn Jones, who at that time was the BASCD president.  In April/May 2007 he was also leader of the Scottish Mountaineering Club East Greenland expedition 2007.

Colwyn Jones, BASCD president in 2007/08 pictured at the Conference dinner, Edinburgh Castle on Thursday 26th April 2007.  With his predecessor Dr Sue Gregory the BASCD President in 2006/07. Four days later Colwyn was camped on a Glacier in Greenland.A map of The Staunings Alps in North East Greenland when the BASCD Glacier was named. 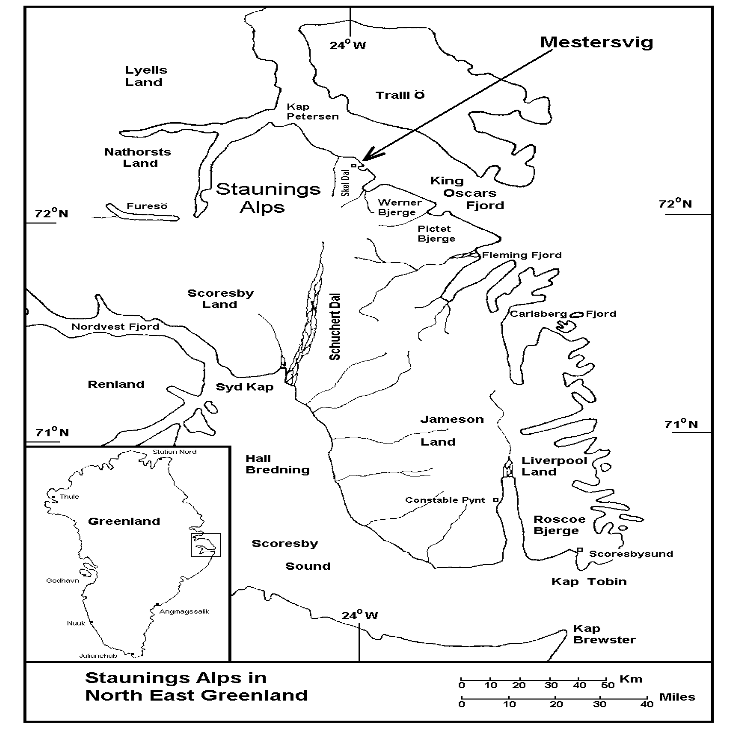 This was the venue for the Scottish Mountaineering Club East Greenland expedition 2007 Colwyn Jones was the expedition leader and medical officer.

The Staunings Alps of Scoresby Land in North East Greenland sit just within the southern edge of the largest national park in the World.  The North and East Greenland National Park covers 972,000sq. kilometres and was established in 1974.

The Staunings Alps are 500km north of the Arctic Circle at 720N and cover an area of some 6000 square kilometres.  They are a complex range of granite peaks named after Thorvald Stauning (1873-1942). Stauning was Denmark’s leading Social Democratic statesman, social reformer and an influential Government Minister from 1924 to 1940. He helped to shape the modern state of Denmark.

The region is largely uninhabited and isolated with a reputation for beauty and mountain grandeur. The mountains have a well-earned reputation for sound granite, soaring faces and complex ridges.

The latitude means continuous daylight during the late spring and summer months with the combination of the low angle of the sun and searing white glaciers contributing to the stunning beauty of the area. During the short summer season settled anticyclonic weather and very dry air give extraordinary views. It is with good reason that the area has been named the ‘Arctic Riviera.’ 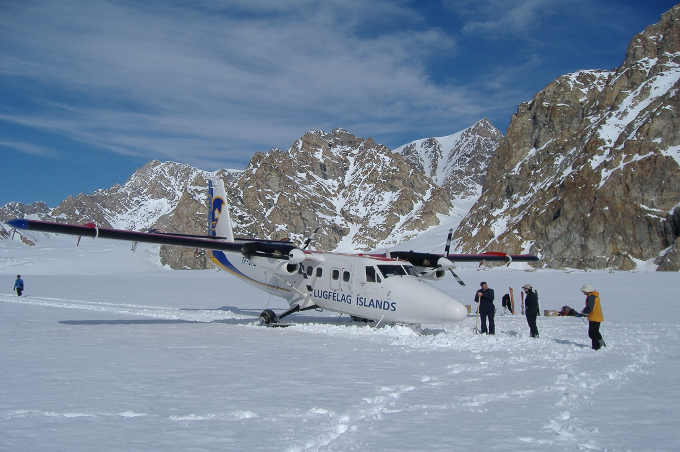 Arrival in Greenland on 30th April 2007, 3 days after the end of the BASCD Spring Scientific Conference in Edinburgh, hosted by Colwyn Jones. The plane is a de Havilland Canada DHC-6 Twin Otter

This is the site of Basecamp one on the Lang Glacier in the middle of the Staunings Alps in North East Greenland. The expedition members had to help to dig the ski-equipped plane out before it could safely take off! 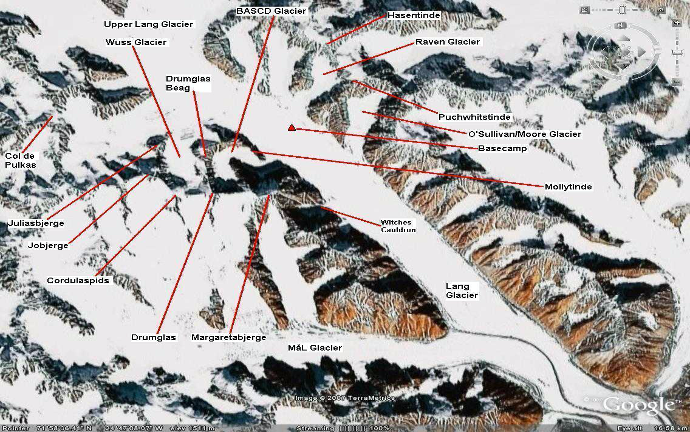 This Google Earth picture shows the position of Basecamp, the BASCD glacier and a number of mountains which were first climbed by Colwyn Jones and his colleagues during the Scottish Mountaineering Club East Greenland expedition 2007. 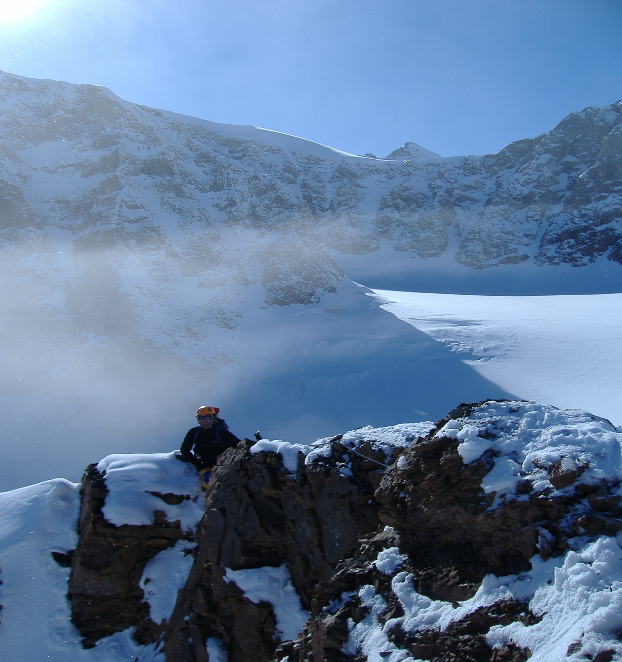 When Colwyn and his climbing partner (Brian Shackleton) scaled Margaretebjerge, they started at a small subsidiary glacier they named the Witches Cauldron.  Their route was via a long and steep gully which was subsequently named the Presidential Couloir.

The climber approaching the summit is Stephen O’Sullivan.

The peak in the far background is Joberge named after the wife of an expedition member Jo Laubscher.  The first ascent of this peak was on 6th May 2007. 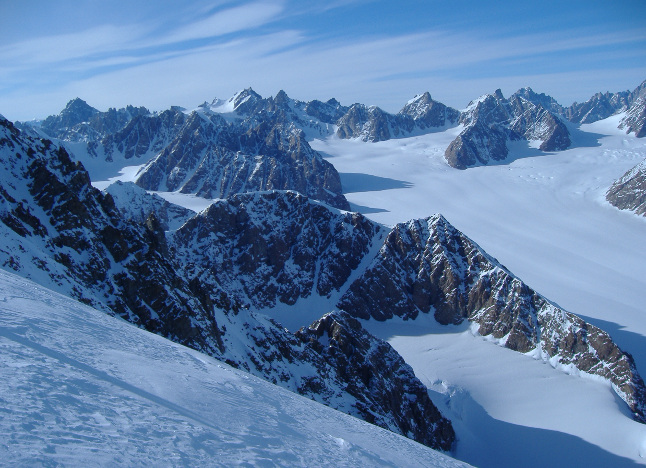 The BASCD glacier seen from the east flank of Margaretebjerge, near where the Presidential Couloir reaches the summit snowfield of this impressive peak.

The larger glacier flowing from the north east is the Lang glacier on which basecamp had been established.

Drumglas Beag was first climbed by 6 members of the 8-person expedition on 1st May 2007.

Norsketinde in the distance is the second highest peak in the Staunings Alps mountain range and is shown to allow orientation.